Ducks are raised for both meat and eggs throughout Asia, and are an important component of animal agriculture in Indonesia, Philippines, Thailand, Malaysia, Vietnam, Taiwan and China.

Many systems are used for duck production in Asia, and in some of them nutrition inputs are provided through scavenging, a combination of scavenging and/or use of ingredients such as rice bran, snails etc. However, large numbers of ducks are fed on balanced, mixed diets, often in pelleted form. Varieties of ducks used vary greatly from country to country. All of this makes it difficult to define nutrient requirements. In this article an attempt is made to provide information on the feeding of ducks for both meat and eggs. The information is derived from experience, and from a number of literature sources. For meat ducks, most information relates to the Pekin type of meat duck. For laying ducks, the information is believed suitable for small bodyweight laying ducks such as the Indian Runner type. 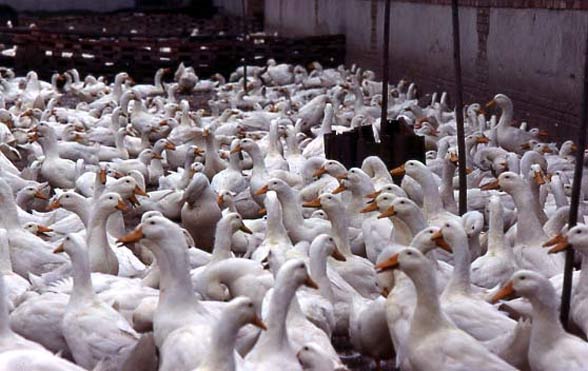 Nutrient Requirements
Meat/growing ducks.
Information on nutrient requirements is provided in Table 1. Meat ducks of the Pekin type are commonly fed with a 2 stage program, incorporating a starter to 2 weeks of age, then a grower diet to market. Market weight of around 3 kg liveweight is common, achieved at 42-45 days of age. A program which is nutritionally more correct would be a 3 stage program using a starter diet to 2 weeks, a grower diet 2-4 weeks followed by a finisher diet to market.

Energy levels both higher and lower than those indicated in Table 1 may be fed. Lower energy levels tend to be used when low energy/high fibre by-products such as rice bran, and wheat bran are readily available, and are desired to be used at high levels. Higher energy levels, achieved through fat addition, will tend to increase growth, but may lead to fatter carcasses.

Minimum protein levels are not indicated, and are not necessary if formulation is on the basis of these 8 digestible amino acids. However in practice, 20-21% protein will be seen in starter diets, 16-18% protein in grower diets, and 14-16% protein in finisher diets.

Fat levels in the carcass may be influenced by energy, or more correctly energy/protein ratio of the feed. High ratios tend to increase fat levels, and vice versa. This is of course also influenced by the genotype of the ducks. For the Chinese type of roast duck, a strong layer of fat beneath the skin is desired and a higher energy/protein ratio is used to achieve this.

Laying ducks.
Information on nutrient requirements for laying ducks is provided in Table 2. One set of nutrient specs is given, although a second stage diet with somewhat lower amino acid specs may be fed from around 20 week into the laying period.

Energy levels lower than those indicated in Table 1 may be fed. Lower energy levels tend to be used when low energy/high fibre by-products such as rice bran, and wheat bran are readily available, and are desired to be used at high levels. Laying ducks will perform well on lower energy diets.

Minimum protein levels are not indicated, and are not necessary if formulation is on the basis of these 8 digestible amino acids. However in practice, 17-19% protein will be seen in laying duck diets.

Feeding Method
Growth rates and feed efficiency are improved when ducks are fed pelleted or crumbled diets. Pelleted diets are commonly fed to ducks of all classes. Mash feed can be used but are rather inefficient, as mash feed tends to form a sticky paste when mixed with saliva, which cakes and accumulates on the outer ridges of the mouth. Ducks then make frequent trips to water to wash their bills, causing feed wastage. One solution is to feed wet mash. Dry mash should be mixed with water just before feeding, and enough water added to form a thick “gruel” without making it too watery. Mixing and delivery of wet feed could be automated, as is common in feeding pigs.

In the case of pelleted diets, good pellet quality, with a minimum of fines (less than 5%) should be fed. Pellet diameter of 2-3 mm for young ducks is suitable, while up to 4 mm can be used for ducks over 2 weeks of age, and for laying and breeding ducks.


Ingredient Use
There is considerable information, often anecdotal, on the suitability of various ingredients for ducks. In practice many duck diets closely resemble diets for chickens, in being largely corn-soybean meal type. However there is some information on individual ingredient use which should be considered:

Corn. Is a major grain for feeding ducks in many Asian countries? For example duck diets used for the large duck industry in Taiwan are predominantly corn-soybean meal. Corn may be contaminated with high levels of aflatoxins, depending on conditions around harvest and during storage, and this should be checked by assay.

Cassava. This high starch root product is used in duck diets in countries such as Thailand. The author has seen pelleted diets devoid of corn or other grains and therefore with levels of cassava over 60% used for Pekin-type meat ducks in Thailand recently, apparently with good results. Contrary to some opinions, cassava is not associated with aflatoxin.

Wheat. When available and economic, wheat is an excellent grain for ducks. It gives good pellet quality due to the gluten protein, and is devoid of aflatoxins. Wheat can be used as the sole grain. A xylanase enzyme should be used when using wheat.

Wheat/rice by-products. Ingredients such as fullfat rice bran, extracted rice bran, wheat bran, and wheat pollard appear to be well utilised by ducks. There are indications that they are better utilised than by chickens of similar age. Research work from Indonesia in the late 1970’s showed consistently that rice bran could be used up to quite high levels for growing ducks without growth depression, while similar levels reduced growth in broiler chickens.

In an enzyme trial in the Philippines, shown in Table 4, a diet with 50% wheat pollard gave equal egg production, equal egg size, similar feed intake, and similar bodyweight change to a wheat-based diet, despite having a book value of 200 Kcal/kg lower energy. This suggests that the 2,000 Kcal ME/kg assigned to the wheat pollard was an underestimate of its actual energy value.

Copra meal/cottonseed meal, groundnut meal. These protein meals tend to be avoided for use in duck diets, due to their potentially high levels of aflatoxin. Otherwise they are suitable ingredients, but testing for aflatoxins is recommended before use.

Broken rice. This is an excellent grain for ducks, having a high energy value, above that of corn and wheat, and being free of aflatoxins.

Feed Additives
Several additives which may be useful in duck diets are discussed in this section:

1. Phytase. Microbial phytase releases phosphorus from the phytate found in grains, grain byproducts, and vegetable protein meals. Digestibility of amino acids and of energy are increased as a result. Little work has been done with phytase for ducks. However a trial from China with laying ducks suggests that phytase is effective in this species, and should be economic to use (Heindl, 2000).

The published work of Farrell and Martin (1993) also indicate that phytase is effective in meat-type ducks.

2. Xylanase. Fibre digesting enzymes, based on xylanase or combinations of xylanase with other cellulases, protease and amylase appear to be effective in improving digestibility of diets based on either wheat or corn, and should be considered for use.

In a trial conducted at the Institute of Animal Science, University of the Philippines, Los Banos, a Trichoderma xylanase enzyme improved egg production, daily egg mass, feed conversion, and weight gain in ducks fed diets based on either wheat or wheat pollard (Creswell, 1995).

In a trial conducted at Purdue University, USA, a Trichoderma xylanase enzyme was tested in wheat-based diets for meat ducks (Table 5). Enzyme addition improved the FCR of the ducks by 14 points (control group FCR In a trial conducted at the Roslin Research Institute, UK, the effect of adding a Bacillus based protease, a Bacillus based amylase and Trichoderma based xylanase enzyme complex on the performance of ducks fed corn-soybean meal based diets up to 42 days of age was measured. Both diets were fed as pellets. Results are shown in table 6. Enzyme addition resulted in a 5-point improvement in FCR (p<0.01). The enzyme fed ducks were also heavier and were of a more uniform bodyweight.

3. Antibiotics. Low level antibiotics as growth promoters are commonly used in diets for growing ducks. Responses appear to be similar to that in chickens. Given the low costs of these, they are generally believed to be economic. Products used are virginiamycin, zinc bacitracin etc. Antibiotic use in layer ducks is probably not necessary, or advisable.

4. Beta agonists. There are several literature reports indicating that beta agonists may be effective in meat-type ducks. Cimaterol was tested at several levels in Pekin ducklings (Dean and Dalrymple, 1988). At 0.25 ppm inclusion in feeds, Cimaterol increased breast muscle weight 21%, increased thigh + drumstick muscle weight 13%, decreased weight of the skin-fat layer 9%, and improved feed conversion 2.5% with no effect on bodyweight gain. Farrell (1991) showed reduced carcass fat and abdominal fat pad with 4 ppm Cimaterol. There is widespread use of these products in some Asian countries, for example Malaysia.

Ractopamine is the only beta agonist developed specifically for animal feed use, which has been found to be safe and has been approved for use in pigs, by the FDA of the U.S.A. and in a number of other countries, including Philippines and South Korea. To the author’s knowledge, this product has not been tested with ducks.


Aflatoxins
The high susceptibility of ducks to aflatoxins is well known. Among poultry, ducks are the most susceptible type. It is suggested that aflatoxin levels as low as 25 ppb in feed will cause increased mortality and liver lesions in laying ducks. Thus all ingredients and the final feed should be screened for aflatoxin levels on a continuous basis. An effective toxin binder might be useful where there is a risk of aflatoxins.


This article hasn't been commented yet.

Feeding Programs for Egg-strain Pullets up to Maturity

Famuos (What is poultry farmy?)