Phase feeding refers essentially to reductions in the protein and amino acid level of the diet as the bird progresses through a laying cycle. The concept of phase feeding is based on the fact that as birds get older their feed intake increases, while their egg production decreases. For this reason, it should be economical to reduce the nutrient concentration of the diet. At this time, it is pertinent to consider a conventional egg production curve of a layer, and superimpose both egg weight and daily egg mass output (Figure 7). If nutrient density is to be reduced, this should not occur immediately after peak egg numbers, but rather after peak egg mass has been achieved. There are two reasons for reducing the level of dietary protein and amino acids during the latter stages of egg production namely, to reduce feed costs and secondly, to reduce egg size. The advantages of the first point are readily apparent if protein costs are high, but the advantages of the second point are not so easily defined and will vary depending upon the price of eggs. When a producer is being paid a premium for extra large and jumbo eggs, there is no advantage to using a phase feeding program unless egg shell quality is a problem. 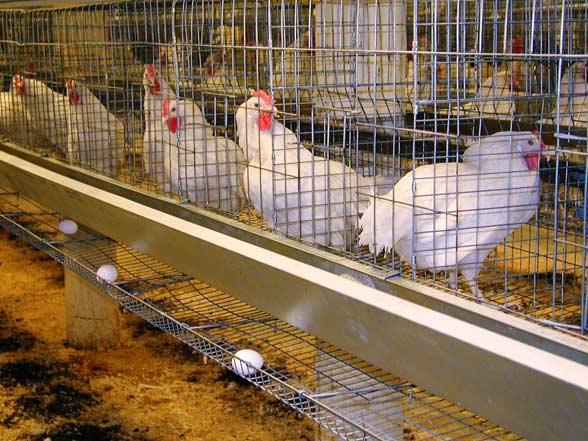 It is difficult to give specific recommendations as to the decrease in dietary protein level that can be made to reduce egg size without decreasing the level of production. The appropriate reduction in protein level will depend on the season of the year (effect of temperature on feed consumption), age and production of the bird, and energy level of the diet. Hence, it is necessary that every flock be considered on an individual basis before a decision is made to reduce the level of dietary protein. As a guide, it is recommended that protein intake be reduced from 17g/day to 16g/day after the birds have dropped to 80% production, and to 15g/day after they have dropped to 70% production. With an average feed intake of 100 g/day, this would be equivalent to diets containing 17, 16 and 15% protein. It must be stressed that these values should be used only as a guide after all other factors have been properly considered. If a reduction in the level of protein is made and egg production drops, then the decrease in intake has been too severe and it should be immediately increased. If, on the other hand, production is held constant and egg size is not reduced then the decrease in protein intake has not been severe enough and it can be reduced still further. The amino acid to be considered in this exercise is methionine, since this is the amino acid that has the greatest effect on egg size. Phase feeding of phosphorus has also been recommended as a method of halting the decline in shell quality often seen with older birds. Using this technique, available phosphorus levels may be reduced from approximately 0.4% at peak production to slightly less than 0.3% at the end of lay. Table 10 shows an example of phase feeding of protein, methionine and phosphorus, related to egg production, and independent of feed intake.

A major criticism of phase feeding is that birds do not actually lay "percentages" of an egg. For example, if a flock of birds is producing at 75% production, does this mean that 100% of the flock is laying at 75% or is 75% of the flock laying at 100% production? If the latter is true, then the concept of phase feeding may be harmful. If a bird lays an egg on a specific day, it can be argued that its production is 100% for that day, and so its nutrient requirements are the same regardless of the age of bird. Alternatively, it can be argued that many of the nutrients in an egg, and especially the yolk, accumulate over a number of days, and so this concept of 100% production, regardless of age, is misleading.

Advocates of phase feeding indicate that birds can be successfully managed by reducing protein/amino acid contents of the diet-others suggest that nutrient specifications are too high to start with initially, and that phase feeding merely accomplishes normalization of diet in relation to requirement. The bottom line is that environmental and management conditions vary from flock to flock, and certainly from season to season within a flock. For this reason, the basis of phase feeding must be an accurate assessment of the nutrient intake relative to requirement for production, growth and maintenance.

This article hasn't been commented yet.

Feeding Programs for Egg-strain Pullets up to Maturity

Famuos (What is poultry farmy?)